The Most Difficult Thing Is To Stop Talking and Start Doing 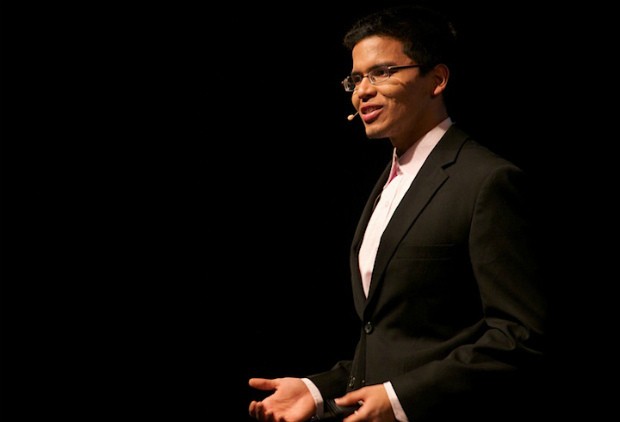 Russians don’t like to be compared with Americans. It happens because of that we lose in some points. Usually our reaction is to get offended and murmur the mantras about Russian’s original way. But there are common ways for both countries. One of them is depicted by coordinator of 100KCheeks Stanford Business School project Vineet Singal.

Charities Aid Foundation (CAF) published its rating of national charities level in 2011. USA was named to be the most active country on the field of charity. Second and third placed were taken by Ireland and Australia. Russia took 130 place. Obviously it was naive to expect Russia to be the leader of this rating. The number of charity social projects in Russia still is too small.

Executive.ru asked Vineet Singal to describe the way 100KCheeks project works. It is the Stanford Business School student’s project. 100K Cheeks helps to find bone narrow donor for people with leukemia. A group of Stanford students is leading a truly remarkable effort to save hundreds—possibly thousands—of lives using social media, combined with on-the-ground efforts. The goal is to get one hundred thousand individuals into the National Bone Marrow Registry this year.

Vineet Singal told about the project’s mission and ways to get it.

Executive.ru: How there was an idea to create a resource 100K Cheeks? Who is the author of idea? When the resource has been created?

Vineet Singal: Since the very beginning, I took an active role in spearheading the direction of the newly formed One Hundred Thousand Cheeks, is a Stanford-based group dedicated to getting 100,000 people signed up for with the national bone marrow donor registry. While the effort is tied to underrepresented groups in general, we focus mostly on the severe shortage of South Asian donors in the registry, as there is a meager 1 in 20,000 chance for a potential South Asian recipient to find a match. The effort is the action arm of The Dragonfly Effect, a book our mentor Jennifer Aaker co-authored with her husband. Dragonfly focuses on using social media to create widespread, infectious action and details the story of Sameer and Vinay, two patients whose bone marrow donor registration campaigns registered over 24,611 South Asians in 11 short weeks.

Executive.ru: What are the purposes of the resource?

V.S.: I was selected amongst many viable candidates to lead the team. In a statement I submitted, I explained my motivation as follows, “Having seen several - primarily African American and Asian American - patients suffer and die for lack of a matching donor deeply ingrained in me a ﬁerce urgency to get more and more people registered as marrow donors.” As a newly formed team with an ambitious goal, 100KCheeks lacked direction. Among countless endeavors, I helped organize countless drives, led the team to organize a nationwide “College Challenge” getting schools nationwide involved, and helped amplify the efforts of existing donor campaigns. These included families of those suffering from cancer such as Cure Sonia, Cure Rayan, Save Sanjana and others. In developing these close, personal relationships, I became a crucial source of support for these families.

Executive.ru: Who can become the donor of a marrow? What for this purpose it is necessary to make?

V.S.: In this past year, we have been able to get to know individuals and families who have been touched by bone and blood cancers such as leukemia. We have been amazed by how easy it is to help if you are lucky enough to be matched. Because of new technologies, such as Peripheral Blood Stem Cell (PBSC) donation, the process of giving bone marrow is much easier than people think -- a process not too dissimilar from donating blood.

Executive.ru: What strategy is used for site advancement?

V.S.: We have been amazed by the power of a simple story and what happens when those stories are shared. We use social media and traditional media to advance these stories. We have worked directly with individual patient campaigns like Save Samir, CureSonia, Help Grace and most recently, Amit Gupta Needs You and engaged partners like DoSomething.org and recently, waystohelp.org, to engaged thousands of college and high school students respectively. And finally, in order to spread the word, we engaged big players in social media and traditional media (CNN, NBC, AdAge, Huffington Post) etc.

Executive.ru: Describe, please, who is the average donor. Whether it is possible to outline a portrait of this person?

V.S.: The average donor could be anyone! Jordan Weissman, for example, was a 15-year-old leukemia patient who is now a survivor thanks to his six year old sister, and tells his story on YouTube. If a six year old can do it, so can you.

Executive.ru: Do you try to help all who asks about the help?

Executive.ru: What obstacles do you face at work in the Internet?

V.S.: Our most common obstacle is translating words and ideas into action. How do we create organic movements out of stories that are effective at mobilizing large volumes of people. One concept we are spearheading is “Social Change in a Box”, which is an extension of Dragonfly designed to enable quick, effective action for donor campaigns. Currently, a huge problem is the huge learning curve that exists between when a family learns about a diagnosis and when they actually take action. We hope to eliminate that learning curve and give families (and anyone else who hopes to amplify their efforts) all the resources they need to conduct drives, register people online or run an effective social media campaign.
In addition to several other initiatives, we are presently working with a Stanford alum and business tycoon from Indonesia whose friend is suffering from leukemia. We led efforts to provide consulting advice, resources to help conduct drives in Indonesia, such as videos, flyers and other print material and social media amplification. This effort, “Help Grace”, helped register thousands of new donors in Indonesia, which is significant as Indonesia lacks a national bone marrow registry. We are hoping to expand this work to create more systemic change in Indonesia (i.e. towards the creation of a national registry).

Executive.ru: The most difficult is to gain trust of the potential donor. How to make it?

V.S.: The most important thing is being open and honest about the donation process, and letting the potential donor make his or her own decision whether or not to register.

Executive.ru: What it is more difficult – to convince to become the donor or to bring monetary donations?

V.S.: Both are difficult in their own way. It is easier to convince someone to do a free cheekswab, but the challenge always is for them to say yes when called to. Monetary donations are also hard to come by in this struggling economy.

Executive.ru: What offline-tools are used for attention attraction to a site?

Executive.ru: Whether you agree what the Internet as the tool is secondary, and the main, this presence of the society, ready to help and share?

V.S.: The new goal for 100KCheeks (from November 2011 – November 2012) is to bank 1 million people worldwide. I am working closely with Dr. Robert Negrin, the chief of the Bone Marrow Transplantation unit at Stanford Hospital, to target transplant centers across the nation and work with their patients to find matches. There are also some recent advances in the field of marrow extraction technology that we are tapping into. For instance, one of our advisers is Daniel Kraft, who pioneered this FDA-approved 'Marrow Miner', a new device that allows quick extraction of marrow with minimal pain to the donor. We are in talks with various companies and transplant centers to accelerate the widespread use of this device, one that will certainly help assuage a whole host of concerns from potential registrants and donors.

Executive.ru: It is obvious that charity should be simple and mass. How to achieve it?

Executive.ru: Whether it is necessary to accustom a society to comprehension of what charity and participation in social actions – necessity and a duty of each citizen?

V.S.: Yes; this is ideal. We are trying to do the same for 100KCheeks (by making marrow registration the norm).

Executive.ru: Unfortunately, trust level in Russia is very low. Can we struggle with it?

V.S.: As I mentioned, the most important thing is being open and honest about the donation process, and letting the potential donor make his or her own decision whether or not to register.